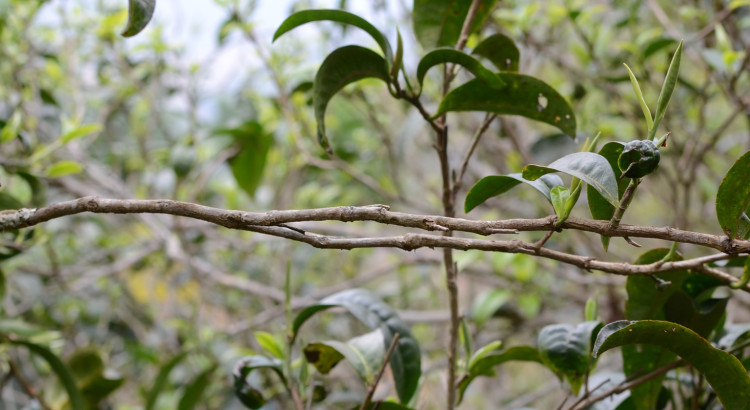 This year, the rains came early to Yunnan and it had a strong effect on the Puer tea in every region. I had to work harder this year than in previous years in terms of tea tasting. Teas from some areas, and farmers that I have worked with in previous years, seemed to be lacking. After two months in Yunnan, I could still keep pressing on further to sample and find better teas. Perhaps there is always a better tea? At least my stomach was thankful we were taking a break from fresh tea.

In many areas, the tea budded and was picked later than in 2014, particularly the old arbor Puer trees. For reference, spring Puer tea is ready to be plucked at different times depending on the age of the trees, amongst other factors. As a general rule, older trees bud much later than smaller bushes. We even heard of some old arbor trees in Laobanzhang that still hadn’t been picked by mid-April. At the absolute earliest, small bushes are ready to be plucked by late February. For old arbor trees, the earliest I have ever seen or heard of spring tea being ready is mid-March. Example, this year our spring old arbor Yiwu tea was plucked on April 5th. Anything else listed as spring that was picked pre-March is either not spring, not old arbor, or both. Just a fact we thought might be worth clearing up…*cough*…

We have already pressed some of our spring teas, and some of the ripe teas are still being pressed this week. We look forward to the second Spring harvest this year; there might be some really excellent teas, but it is totally weather dependent. I’ll be going through samples in late May to see what is out there.

The prices in the Spring of 2015 were unpredictable. Generally speaking, areas with lesser fame had a slight reduction in their old arbor Puer prices. Areas with major fame, such as Laobanzhang, maintained stable prices. Producers with high quality tea sold out early, and those with lesser quality tea still have plenty of stock as of the writing of this article.

As a trend, this is good news for the consumer. It indicates that high quality tea will drive the market. In past years when the Puer market was booming, all of the tea was swallowed up by speculation. Good and bad, old arbor and young tree. When the thirst for Puer tea is so strong that even low quality tea from young trees is purchased with fervor, it does a disservice to the market. Quality is disregarded in favor of quantity and the tea that hits the market is both low quality and overpriced. This year the trend reversed slightly, with quality being a driving factor. Hopefully this trend will continue as it forces producers to focus on making the best tea they can, rather than sheer volume. As I have mentioned in the past, I believe the long-term bubbles in the Puer market will collapse for low-quality, overproduced material, whereas high-quality tea will always hold (most of) its value. If you are new to Puer tea, think of it as a real estate market. When a real estate bubble bursts, downtown Manhattan still has a market, but far flung suburbs might see a drastic price drop. Regardless of the market, there will always be a wealthy group of people who want to live on 5th Ave and drink old arbor Yiwu.

As always there are exceptions to the rule, with some regions rising in price in spring 2015 rather than stabilizing or declining. Most notably Xigui’s prices rose from the previous spring. I spent a week in the area and visiting Xigui early in the spring. I personally think the price hike is justified. All prices equal, I would prefer Xigui over Bingdao. And considering the major price gap between the two, it does not seem odd that Xigui prices would increase. The increased market demand for limited, high quality material will always drive two things: higher prices and a deluge of fake tea. So, if you want to start buying fresh Xigui now, proceed with caution.

What to Buy and What to Avoid

As usual, my recommendation for consumers looking to purchase Spring tea is to avoid the hype and famous names. There is plenty of quality tea to be had in any given price range and not much reason to chase villages with overly inflated prices. If this sounds like generic advice, it is. It’s less generic when you consider that I practice what I preach. As it happens, I really enjoy Xigui tea, but I didn’t buy any this Spring, not even for my personal drinking. I did purchase some to drink in the previous years for my own collection. Long time followers of my blog will know I have had a penchant for Guafengzhai for quite some time. These last two years, their village has been so woefully full of fake tea and the prices so high, I didn’t purchase old arbor tea from them either.

This year, I will also be making a move towards intentionally not labeling specific village names and misleading tree ages. I want to re-focus on the tea, providing broad guidelines like “this tea has strong bitterness and is from Menghai area” rather than “Laoman’e village pure ancient tree!”  Labels are so blatantly misused that they have become meaningless. Every website seems to have ancient tree tea from villages that ostensibly only have a precious few hundred kilograms of gushu in a season. Not to mention the conspicuous ages of the trees – did they measure the age of each tree? And…how? There seem to be a lot more 300 year old trees in the market than I’ve seen with my own eyes in the tea mountains.  Rather than continue with the name dropping and inflated age hype, I think it is better to focus on the tea itself. If you avoid the hype, your wallet and mouth with thank you.

With that being said, the final word is to follow your own tastes and your own budget. Buy what you like and can afford. And most of all, enjoy drinking the new 2015 Spring tea.

Enjoying Twodogteablog? Get the latest news and deals on the teas we source at white2tea.com
Your information will NEVER be shared or sold to a 3rd party. This is only for spreading good tea.